Moles are dark spots on the skin.  You can be born with moles.  They also appear over time.  Heredity and spending time in the sun may influence the amount of moles that you have. 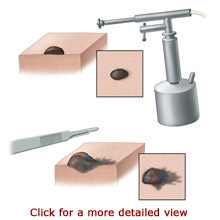 Your skin covers your body and protects it from the environment.  Your skin is composed of three major layers, the epidermis, dermis, and subcutaneous tissue.  The epidermis is the outermost layer of your skin.  It protects your inner skin layers.  The epidermis is made up of protein containing cells called keratinocytes, also referred to as squamous cells.  The keratinocytes form at the bottom layer of the epidermis and move upward to the outer layer.  They eventually wear off and are replaced by the next layer of cells.  The epidermis also contains melanocytes.  This type of cell contains color pigments called melanin.  The lowest layer of the epidermis is composed of basal cells.
The dermis is your second layer of skin.  It is made up of connective tissue and provides structure.  It is composed of collagen and various elements that give your skin strength and elasticity.  The dermis contains hair cells, sweat glands, and sebaceous glands that secrete oils to hydrate the skin.
Subcutaneous tissue composes your inner most layer of skin.  Subcutaneous tissue contains fat cells.  The fat cells insulate your body and make your skin appear plump and full.  Below the subcutaneous tissue are fat tissues, your muscles, and your bones.
Back to top

Moles are dark spots that appear on the skin.  You may have been born with moles or developed them over time.  Most moles are harmless.  However, some moles can undergo changes and become precancerous or turn into skin cancer.  Sunlight exposure plays a role in mole development and changes.  There appears to be a hereditary component as well.  If your close family members had abnormal moles, you have an increased risk also.
Back to top

Moles appear as small dark spots on the skin.  They can differ in size, color, and shape.  Moles can be raised or flat.  They can contain hair.  You may have more moles in areas that are exposed to the sun.
You should look for any changes in your moles, especially moles that are dark or flat.  Changes in moles may be a sign of pre-skin cancer or skin cancer.  Look for changes in size and color.  Look at the borders to see if they are regular.  Both halves of the mole should have the same shape.  Contact your doctor if you experience a change in a mole.

You should have your doctor perform a full body mole inspection.  Your doctor can determine if your moles are healthy or if they are precancerous or cancerous by looking at them and possibly performing a biopsy.  A biopsy involves removing the mole or a section of the mole for examination.  You should tell your doctor about any changes in your moles or moles that bother you.  Your doctor can discuss mole removal options for cosmetic purposes as well.
Back to top

Your moles can be removed in a quick procedure in your doctor’s office.  Moles can be surgically removed.  Raised moles are surgically shaved to the same level as your skin.  Moles can also be removed by heat, in a method caused cauterization.  Depending on the removal method, stitches may be necessary to close the wound.  In other cases, your doctor will apply antibiotic ointment and cover the wound.
Back to top

Am I at Risk

_____ Moles appear to have an inherited factor.  If your close family members have moles you have an increased likelihood of developing them.
_____ Sunlight exposure appears to play a role in mole development.  Sunlight can also contribute to precancerous or cancerous changes in moles.  People that spend a lot of time outdoors, such as construction workers, lifeguards, and recreational enthusiasts tend to develop more skin changes than people that do not spend large amounts of time in the sun.

Scarring after mole removal is common.  If you are having a mole removed for cosmetic reasons, your doctor may be able to tell you about the type of scarring that may occur before you make your decision.  Some people simply chose to cover their moles with make-up.
In some cases, moles can undergo changes and turn into skin cancer.  You should perform regular self-mole checks and have your doctor perform a full body mole check.  Skin cancer can be life threatening.  Skin cancer that is detected and treated early has the best prognosis.
Back to top

This information is intended for educational and informational purposes only. It should not be used in place of an individual consultation or examination or replace the advice of your health care professional and should not be relied upon to determine diagnosis or course of treatment.