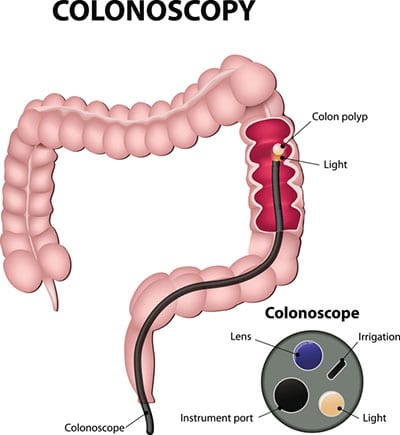 Let’s face it, colonoscopy is the “C” word nobody wants to hear. No one really looks forward to a colonoscopy, or the grueling preparation that is often associated with it. Not to mention the perception that the procedure is invasive, and unpleasant. People tend to ignore symptoms or the advice of their doctor, thinking that nothing could ever happen to them.

However, evidence and research has proven that notion wrong numerous times. Misconceptions, thoughts and fears about the test can lead someone to avoid getting a colonoscopy that in fact, can save their life.

According to the Centers for Disease Control and Prevention (CDC), colon cancer kills about 52,000 people in the United States every year. Many people may not realize this, but colorectal cancer is the second deadliest type of cancer. It affects the large intestine and causes growths called polyps that can eventually become cancerous tumors that form in the tissue of the colon. There is no doubt that screening for colorectal cancer saves lives. But shockingly, one in three adults aged 50 to 75 have not been tested for colon cancer.

Many people with colon cancer do not have symptoms in the early stages. When symptoms do appear, they can vary based on the size of the tumors and location in the large intestine. Some of the signs of colon cancer include rectal bleeding, change in consistency of your stool, change in bowel habits such as diarrhea and constipation, weight loss, fatigue and stomach pain.

A risk factor is defined as anything that affects the probability of getting a disease such as cancer. It is important to note, that different diseases have different influences. Some risk factors, like a person’s age or family history, can’t be changed. Having a risk factor, does not mean that you will get the disease. Researchers have found that colon cancer has several risk factors that might increase a person’s chance of developing it. These risk factors include, family history of cancer, type of diet, age (50 years or older), inflammatory intestinal diseases, heavy alcohol use, smoking, diabetes, obesity, and lack of exercise.

The main purpose of a colonoscopy, is to detect and screen for any abnormalities or precancerous growths, called polyps, as well as areas of inflammation or bleeding. Screenings are imperative, as symptoms of colon cancer are not always noticeable in its early stages. Once a person turns 50 years old, it is recommended by doctors that they undergo a colonoscopy screening to check for these precancerous polyps and early onset colon and rectal cancer. A colon polyp is a small growth on the inner lining of the large intestine. It is well established that most colon cancers arise from colon polyps. By identifying and removing colon polyps during a colonoscopy, doctors can prevent their progression to cancer and ultimately save lives. During a colonoscopy your doctor looks at the inner lining of your large intestine (rectum and colon). A thin, flexible tube called a colonoscope is inserted, equipped with a small video camera, so the doctor can take pictures or video of the colon.

The conversation about colonoscopies often leave people with fear and hesitation. But waiting too long will put you even more at risk.  Although recent statistics have shown that death rates of colon cancer have been dropping due to new technological advances in Oncology, it is known that early detection can make a difference in terms of treatment, survival, and death. Colon cancer is one of the preventable cancers, providing the patient is screened.

It’s really not that bad!

A colonoscopy is the most popular method to detect colon cancer.  Over the years the way the test is administered has evolved, resulting in an easier time for the patient. One of the biggest changes in colonoscopy screening is the type of anesthesia used. In the past, patients were given a sedative and narcotic and so they were semi-awake during the procedure. Now, an anesthesiologist is used so that the patient can be put into a deeper sleep without risking safety. This ultimately means the procedure can be done more quickly and patients are kept very comfortable. In addition to more generous use of anesthesia, advances in the instruments used during the test itself are also increasing the comfort level for patients. These advances in instruments mean insertion methods have also improved, as doctors continue to perfect the way they perform the procedure with these new instruments.

In order for a colonoscopy to be successful in terms of getting a clear visualization, preparation must include emptying the bowels completely. Many doctors say that achieving this is essential for a quick, easy, and successful test. In the past this meant consuming up to a gallon or more of a powerful liquid laxative all within a couple of hours.  Now the bowel preparations have gotten better, making it easier to endure them and with much less discomfort. These include recently FDA approved dissolving powders and a pill to help cleanse the colon. These medications, are gentler on the stomach than what has been given previously, with noticeably less cramping.

Other Ways to Screen

Researchers have noticed a difference in the blood of people with precancerous polyps compared to people without polyps. While a  blood test for colon cancer will never replace colonoscopy, one could be used in the future to identify if you have any warning signs of cancer, and then be referred for a colonoscopy for further investigation.  Colonoscopies are still the best way to figure out where the polyps are located, so that they can be removed.

While looking towards the future is promising, there is already one futuristic method of colon screening that is available right now. It’s called a “Virtual Colonoscopy”. This is a noninvasive screening that uses X-ray beams to look inside the colon. This test requires no sedation and is over in ten minutes and has no down time. Patients can return to work the same day. It still requires bowel prep, as the colon needs to be clean to get a good view.

The bottom line is many early stages of colon cancer are asymptomatic, leaving it undetectable. Medical experts say that it is imperative you talk to your doctor and get screened if you are over 50 or have a family history of colon cancer. Find out more information on colon cancer and colonoscopies. Call Intercoastal Medical Group at (941) 362-8662 to make an appointment or request one online today.