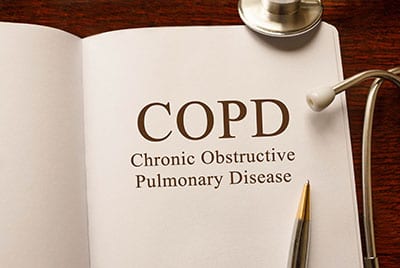 Chronic obstructive pulmonary disease – COPD, for short – is a progressive lung disease which, over time, makes it hard to breathe.

Every year, more than 120,000 American deaths are related to COPD, with cigarette smoking being the most common cause. However, COPD also includes emphysema and chronic bronchitis, the latter of which doctors believe may not always be a characteristic of COPD. So what exactly is COPD, and how do you treat it?

With COPD, the name says it all

C – Chronic, meaning one can expect the disease to progress over time. Some people find it hard to breathe when their allergies act up. Others may get exercise-induced asthma and reach into their gym bag for a rescue inhaler. Unlike allergies or asthma, which usually acts up when triggered, COPD is a chronic condition, meaning that it persists and can get worse with time.

O – Obstructive, meaning that with COPD, the airways of your lungs will thicken or become inflamed. This is where oxygen is exchanged, so it will become exceedingly more difficult to draw air into your lungs. Since oxygen fuels healthy cells, your tissue may become less efficient at ridding your body of carbon dioxide and soon the tissue may deteriorate, making breathing efficiently that much more difficult.

P – Pulmonary is Latin for “pertaining to the lungs,” and that is exactly what is affected by COPD. With COPD, one may expect their airways to become inflamed and eventually lose their elasticity. That deep, resonant cough that is common from one with COPD is the result of too much mucus obstructing the airways. Again, over time, lung tissue will be destroyed, and the ability to be active and energetic will eventually be severely diminished.

D – Disease. COPD is a disease, but the good news is that it is not only manageable, it may be preventable!

Here are a few ways to avoid the risk of getting COPD, or reduce the symptoms if you have it:

COPD is almost always treatable. The key letter here is “C” – chronic – and if symptoms appear early enough, you may be able to stop them in time to prevent the “D” – disease – from taking form.

If you or someone you know either has been diagnosed with, or may be at risk of developing COPD, seek medical attention as soon as possible. Call the experienced, friendly staff at Intercoastal Medical Group at one of our area locations or request an appointment online.