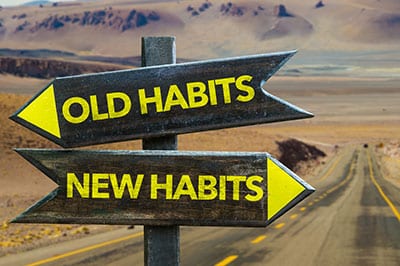 We all know that smoking can be hazardous to your health. It’s printed right on a pack of cigarettes. We also know that if you eat too much junk food, you’re at risk of being overweight if not obese.

But there are other habits you might not be aware of – even though you indulge in them every day – that are pretty bad for your health.

That’s because they can be easily overlooked as you go about your normal activities. However, over time they can have a negative impact on both your physical health and your psychological well-being.

See if you’re prone to any of these potentially self-debilitating traits:

1.     Overeating – even when you aren’t that hungry. There are many reasons you might be compelled to reach for a snack or serve yourself an extra portion when you’ve already had enough. Emotional eating, nighttime noshing, or overindulging at social events can add up to unwanted calories, leading to more than just excess weight in the form of several serious health problems including Type 2 diabetes, high blood pressure, heart disease, osteoarthritis, sleep apnea, kidney disease, and certain types of cancers.

2.     Skipping meals. On the other hand, eating too little by skipping a meal can be just as harmful. You may think that skipping meals will help trim your waistline, but studies show that people tend to eat more during their next meal to compensate for the meal they missed. It also can trigger negative metabolic changes such as elevated fasting glucose levels and a delayed insulin response, which can lead to diabetes. Eating sensibly at regular intervals not only helps you maintain a healthy body weight, but also helps keep you energized and focused from morning to night.

3.     Going to bed late and sleeping in. “Early to bed and early to rise makes a man healthy, wealthy, and wise.” Well, research shows that staying up late and sleeping later in the morning can adversely affect the health decisions you make during the day. In fact, a recent study published in the American Academy of Sleep Medicine found that late sleep correlates with higher fast-food consumption and lower vegetable intake, particularly among men. Also, those who go to bed later and sleep later are less to get physical activity.

4.     Spending most of your waking hours sitting. Sedentary behavior – such as sitting at a desk for hours on end – has been linked to an increased risk of health issues such as obesity, cardiovascular disease, and Type 2 diabetes – thus, the expression, “sitting is the new smoking.” Sitting for too long can also be detrimental to your mental health as studies show that people who sit for long periods of time are at a higher risk of depression. The good news is that getting at least one hour of vigorous activity each day can help counter these effects. If your job requires a lot of sitting, get up and move about for a few minutes every half hour to give your mind and body a boost. Maybe ask for a standing desk; whatever it takes to make the best of a sedentary situation.

5.     Watching too much television. We all have our favorite television shows and stream for hours to catch up on everything we miss. But watching hour upon hour has been found to be bad for your body – and your brain. In fact, studies show that excessive television viewing and low physical activity in early adulthood leads to worse midlife executive function and processing speed in midlife. How much is too much? Those who averaged more than three hours of TV per day for 25 years performed poorly on cognitive tests compared to people who watched less TV. So, turn of the remote and get active for better brain and body health.

6.     Dwelling on previous stressful experiences. Whether it occurred recently or many years ago, reliving a stressful or traumatic event in your mind can lead to increased depressive symptoms. This was confirmed in recent study that found that the less one thinks about an unpleasant experience, the easier it is to avoid a depressed mood. Rather than dwelling on past experiences that you can’t change, focus on enjoying the present moment and positive planning for the future.

7.     Being your own worst critic. Do you often chide yourself for bad decisions? Point out every flaw in your appearance when you look in the mirror? Harsh self-criticism is a self-defeating habit that increases depressive.  Instead, try a little self-love. It will not only make you feel better about yourself, but also make you more resilient to the ups and downs of daily living.

8.     Becoming obsessed with social media. A growing number of studies have found that despite having hundreds of “friends” on social media, following them can lead to feelings of isolation, which is bad for your mental and physical well-being. Also, spending hours scrolling through social media and reading other people’s posts has been found to decrease your mood and may cause you to envy their lifestyle, thus increasing your risk of depression. Instead, opt for more real-life social interactions – lunch with a friend, partying, group activities – that can greatly improve your well-being.

9.     Shopping impulsively. This may boost your morale temporarily, but straining your budget can have long-term harmful effects. Studies show that people who amass debt are three times more likely to have a mental health problem. Certainly, debt can lead to high levels of stress, whereas, reining in your spending, sticking to a budget, and getting your finances in order can have a positive impact on your mental and physical well-being.

10.   Obsessive complaining. Contrary to popular belief, talking about your problems to friends and family isn’t all that therapeutic. While venting about a bad day or frustrating situation helps release negative emotions, it also amplifies those emotions, increasing your stress hormone levels. Constant complaining, however justified, can keep you stuck in a bad mood and set you on the path to depression. Our advice: chill out and focus on resolving irritating problems and don’t sweat the small stuff.

One of the best ways to avoid sabotaging your health is to have a good relationship with a trusted team of medical professionals who have your best interests at heart. Intercoastal Medical Group is a multi-specialty practice specializing in primary care, and much more. With more than 85 doctors in eight locations across Sarasota and Manatee County, we make it easy to find a qualified doctor at a location that’s convenient for you. You can request an appointment online now.